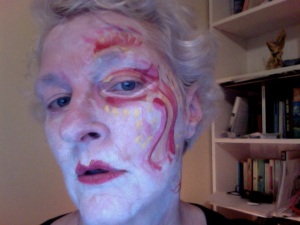 It’s not easy, sitting still and not looking while a nine-year-old paints your face. She’s not overly careful around the eye area and she tends to drip a bit… You have to just breathe out, close your eyes and enjoy the ride.

I’m not one of those Americans that thinks ‘it’s all good.’ I think the relentless positivism we’ve been asked to assume over the past few decades is actually harmful. Cancer patients that don’t get better can feel they’ve not been thinking the right way, or praying hard enough…people can be exploited and not have the language in which to express anger with the conditions in which they work… However, I don’t think there’s any point in being miserable, either. Sometimes you just can’t control things, or you let things slip out of your control.

I have a whole little lecture I give about data storage, about how to save daily iterations of your novel and how to back it up weekly both on a data key and by emailing the files to yourself. But, like anyone else, when I get terribly busy, I sometimes get lax. This week I lost 5,ooo words of my new book.

It happened before computers. Hemingway’s wife was bringing his stories to him, as a nice surprise, when she left them on the train. Hemingway was still mourning those stories, some twenty years later, as the best things he’d written.

But I’m not so sure. My 5K took me through some very difficult technical things; another shift in time for the entire main section of the novel… a shift in my narrator’s voice, as she recalls things from two years earlier…an explanation as to how and why her community lives the way it does…  I’m dreading trying to write it again. It might very well be worse. But it might be better, too.

And anyway, I didn’t sign up to this kind of life with the idea that I would have everything under my own control. I became a writer, much like I sat down for my face painting, in a spirit of adventure.  I think my face turned out fine, for an evening at home making pizza. I think my writing life is more interesting and exciting than if I’d kept doing jobs I didn’t like. Hang on, we’re still moving, and who knows where we’ll go…

Here’s a soundtrack for the blog, since it’s Friday night. Click to hear it. Hope you like it…

For more about positivism and the harm it can do, read Barbara Ehrenreich’s Brightsided.

2 thoughts on “Adventures In Data Loss”