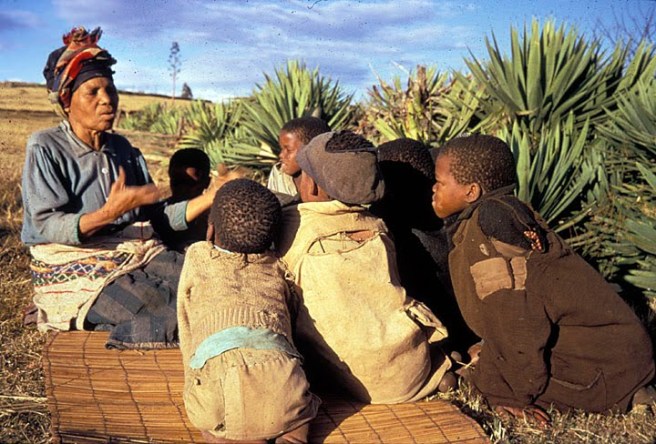 It’s an interesting topic, because it’s one of the places where writers are forced to consider and reveal their philosophy – not just of narrative, but of life.

Let’s look at Shirley Jackson’s short story ‘The Lottery’ and contrast it with the narrative voices of  George Orwell’s 1984  and Dickens’ A Christmas Carol to look at omniscience.

In both the Orwell and the Dickens, the narrative voice is in third person, but follows one character through the story. The feeling of omniscience comes in because the voice knows more than the character: it observes the character and comments on the character. But it is not truly omniscient because it is trapped in the main character’s experience. It doesn’t know where the Spirits of Christmas come from or where they go. It’s not aware of what’s happening in Julia’s torture.  But it sees into the thoughts and emotions of the character.

Both Orwell and Dickens reveal that they feel dispassionate observation can bring greater insight than unexamined lived experience. The act of stepping back and considering one’s actions and emotions obviously has great power for both of these writers.

In Shirley Jackson’s ‘The Lottery,’ we see the entire scene and dip in and out of people’s actions, concentrating on one character and another. But we are asked to infer thoughts and emotions from the outside, as we do in real life. As we read, and particularly as we re-read, we are making judgements about the process, each character, and the nature of ‘knowing’ other people. Jackson is questioning the concept of society and family by questioning our relationship with order, ritual and custom and how the individual is caught in a complex web of knowing and not-knowing. This could not be done if she used what we call ‘interiority’ – the ability to see into characters’ thoughts and emotions.

All three texts are often listed as having ‘omniscient narrators’, but this is not strictly true. No text can possibly hold true omniscience – something that we only become more aware of as science progresses. To hold true omniscience, the writer has to either believe or imagine that the complexity of the universe can be understood and communicated.

If I were to try and write omnisciently about this very moment – the wood of my table, the computer on which I type, my body, my dog’s body, the construction of this room in my house… I could spend innumerable volumes on just those few things and not actually get any farther than narrating that I typed, ‘If.’ By the time I had communicated the way solids form out of atoms to make what we call wood, the characteristics of pine, the history of farm-house tables and what they represent in British society, etc., etc., etc., we would never get to the troublesome ‘I’ of the second word.

Omniscience grew unfashionable about the same time writers stopped believing that heaven was in the sky and hell somewhere deep under our feet. We also began to be very aware of how we choose what we tell. From this point on, point-of-view stopped being a rhetorical focus and began to be a convenient way of limiting the burgeoning knowledge we had acquired about our universe and ourselves – limiting it enough to efficiently convey a narrative.

First person became very popular about this time. Holden Caulfield in J D Salinger’s The Catcher in the Rye is a good example. Caulfield is not omniscient and is not, in fact, even particularly self-aware. Salinger shows us the importance of lived experience – of existence – when he tells this story filtered through a simulacrum of Caulfield’s consciousness. The tenderness of the narrative combined with the way point of view is used makes this unaware teenager heroic and loveable. However, we are trapped inside this simulacrum – and any observations or comments Salinger might want to make must be filtered through the character’s unique way of expressing and observing. Although Salinger pushes the limits of this form and of the existential philosophy that underpins it, the drawbacks are obvious.

These days, I find it easier to throw away the labels of first person, third person, omniscience and instead think about a few things:

It’s easier and more effective when writers consciously work out their strategy for these things and are able to effectively communicate the strategy. For some writers, being inside one character will work.  For others, two or three characters will be necessary and swapping viewpoints will form part of the reading experience. For still others, a narrative voice outside the character(s) is important, commenting and giving additional information. In my own Welcome to Eudora (2007, Random House USA), I wrote as the gossipy knowledge of an entire town. In Dreaming the Bear (OUP Children’s 2016), I used three narrative voices, including one that wonders about the experience of being a grizzly bear.

Nature writers have it tough on this front. They need to inhabit and communicate both experience and a great deal of information. Some of the most successful nature writing uses two first person voices. There is the narrative voice of the ‘now’ or ‘then’ in the field conveying experience and then another which is the ‘back in the library’ or ‘later’ voice that conveys the contextual information. Sometimes the ‘then’ voice is the field experience. Sometimes the contextual information is woven into the field experience, particularly well recently in Peter Reason’s Spindrift.

Tone comes into this, too. But that’s a discussion for another day…