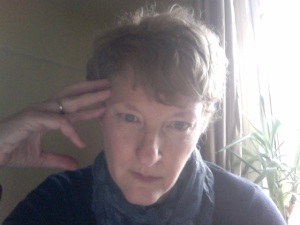 I’ve been working on my fictionalised account of dying in a car accident. It wiped me out yesterday, writing about dying again. I felt sick and shaky and in describing my PTSD, I nearly started it up again. I had a few flashbacks, but then had a cup of tea and a chocolate biscuit and they stopped. It must be good, I thought, to be that powerful. I took Dog for a walk just to be on the safe side.

While I was walking Dog, I ran into a lady from church and Dog played with her dog while we chatted. I said something about my day and she said, ‘That must be very cathartic, writing it all down like that. You must feel soooo much better.’

Well no, I didn’t answer. I feel a whole lot worse, actually.

I  know writing can be therapeutic, but it can also be destructive. Obsessively looking and reliving any event can be less than useful to building a healthy psychology. And writers are often sickly people anyway. They start noticing things because they are sitting quietly, out of the way. They have time to write because they didn’t get chosen for the hockey squad, or (like a surprising number of our MA students) got injured by horses, or have a kind of shyness that almost amounts to an injury. We are, generally, just the kind of people who need to get out more in the fresh air and worry less.

Shelley’s idea that we are ‘the unacknowledged legislators of the world’ might also be true, in a way, but we legislate for lots of different parties. In my bookshelf, Jane Austen sits next to William Burroughs (it’s not that I don’t have any Balzac, etc, I just roughly alphabetise and there’s room for both of them on that particular shelf). I worry about it all the time. I know they’re not getting along. Depending on what you think is right and wrong in this world, you will find great authors who are actively promoting what you think is wrong. Writing does not tell us how to live…if we are looking for it to do that, we have gone seriously astray. If we think we are supposed to do that for other people, we will be very disappointed.

When people ask me why I write, I always say, ‘To serve God.’ That’s me, as a Catholic, as someone who promises every morning that ‘each word, each deed, each thought of mine shall be an act of love divine’, and every evening acknowledges my failure to accomplish the morning’s promise. I don’t mean that I’m writing religious tracts. I mean that I’m writing as well as I can, to make these bridges.

One thought on “More On Why We Write”